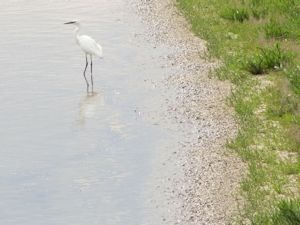 Foulness is an island on the east coast of Essex in England, which is separated from the mainland by narrow creeks. In the 2001 census, the usually resident population was 212, living in the settlements of Churchend and Courtsend, at the north end of the island. The population reduced to 151 at the 2011 Census. The George and Dragon pub in Churchend closed in 2007, while the church closed in May 2010.

Foulness Island is predominantly farmland and is protected from the sea by a sea wall. The island's unusual name is derived from the Old English for wild birds and promontory, and it is an internationally important site for migrating and breeding birds, including avocets. During the North Sea flood of 1953, almost the entire island was flooded, and two people died.

Foulness Island is part of the MOD Shoeburyness weapons test and evaluation Range and is operated by QinetiQ. Due to the hazardous nature of work conducted on the Range, public access is limited and visitors must have a legitimate reason to enter. Residents of Foulness can sponsor visitors and unsponsored recreational visitors can access the Public Right of Way Network when the Range is not active. For further information about gaining access to Foulness Island, visit the QinetiQ MOD Shoeburyness website.

The Heritage Centre on the Island is open on the first Sunday of the month between April and October. Visitors do not need to book or get permission to visit the Centre. The link to the Heritage Centre is https://shoeburyness.qinetiq.com/conservation/foulness-heritage-centre.aspx

The Parish Council comprises 5 councillors and their meetings are usually held on the second Wednesday of every month at the Lodge Farm staff premises, normally commencing at 7pm. Parishioners are welcome to attend.

The Trustees of  the Foulness Island Heritage Centre have decided that  the Centre will not be open in the forseeable future...more

The Next Foulness Island Parish Council Meeting will be held on Wednesday the 13th October 21 at the Lodge Farm Staff Pemises at 7...more

Please contact us using the following details, or via our online enquiry form.